Post here about the Z remake "Zed Online" by DaMarkov

Small thread to discuss the next upcoming release. Version 0.2 is more or less feature complete and went out to some Beta players.
Depending on the number of bugs version 0.2 will be release in the next weeks. 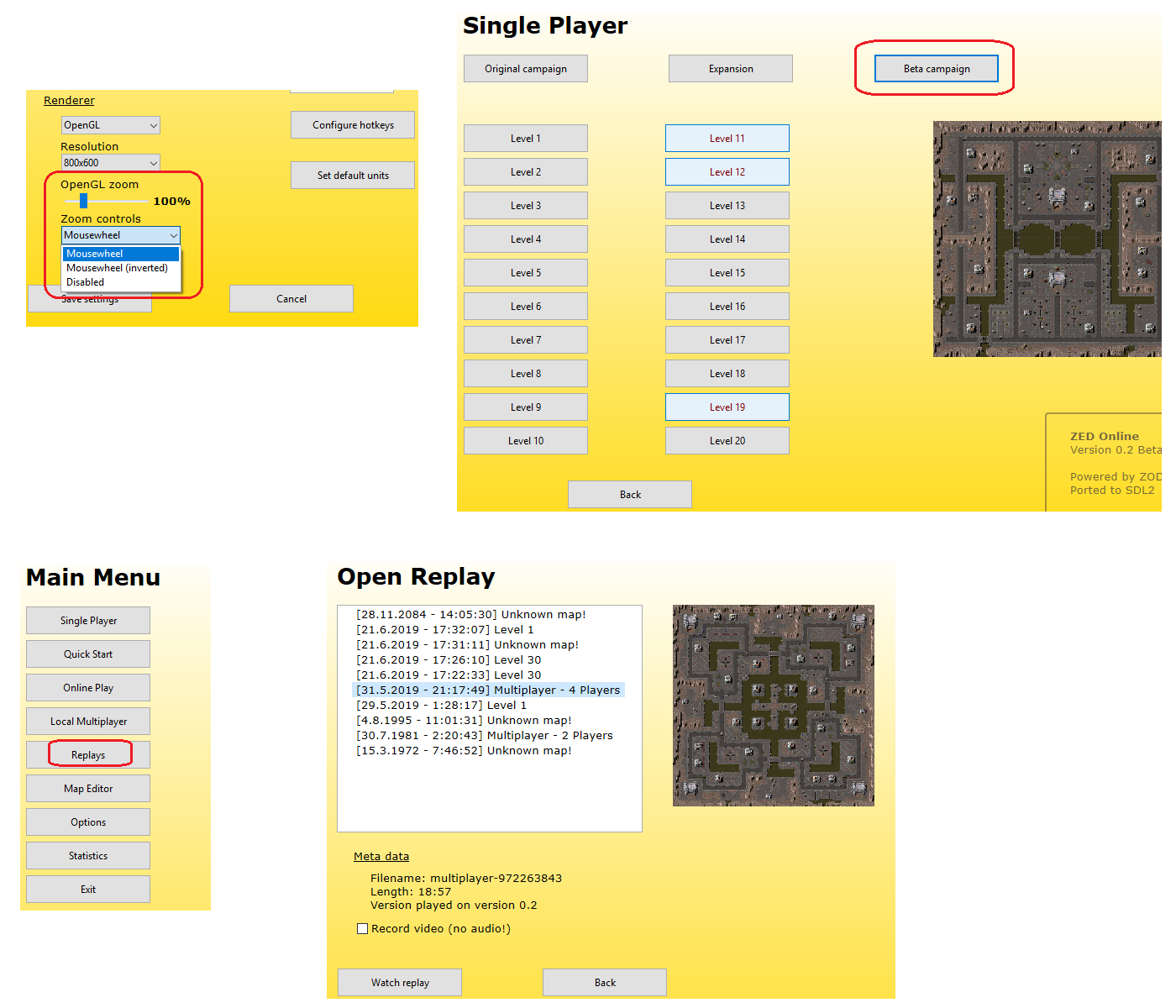 Most important new features in my opinion are:
1) When using the OpenGL renderer the mousewheel can be used to zoom in and out during a match.
Great to get an overview of the map and also to micro-manage certain situations.

2) Replays of matches will be recorded in a replay file (which will be in a replay folder).
These replay files only contain the actions of the players, so they are tiny. About 10kb for a 10 minute long 4 player match.
We also plan to upload these replay files (only single player and only if a new highscore is achieved) as an anti-hacking method.
I would like to point out that now personal data is stored in these files apart from username, user id, time when the match was started (but not the timezone!).

2b) When watching a replay one can also record a video (mp4 file). Audio recording is currently not possible.

3) After finishing the first 35 maps a new "Beta campaign" will open up. These are the maps from the Z DOS black premium disc.
Since the maps are very similar to the original 20 maps the enemy AI will be a bit stronger, so these maps should pose an additional challenge for players who finished the single player campaign.

Apart from that a few minor thing of of course. Some bug fixes. Damage to building/bridges has been changed. Collision detection between buildings and missiles rewritten.
Some minor changes to the pathfinding. Shooting at forts should now be easier (i.e. the center of the fort is now longer the target).
Top

seems like soon enough will have the best version of z possible!
Top

I have decided to release version 0.2 today.
I included the auto-grab feature. That already took me over a week to debug ~.~ had to rewrite more of the unit behaviour than I wanted.
So all in all, here is what's new:

- When using the OpenGL renderer one can zoom in and out using the mousewheel. You can disable this feature in the options menu.
- Replays will now be recorded! (New option "watch replay" in the main menu)
- Units now automatically do small detours to grab flags/vehicles
- I included the 20 "beta maps". These map are playable after finishing the first 35 maps. I increased the AI difficulty for these maps, so there should be an extra challenge
- Some more custom maps

Bugfixes:
- Fixed a bug when connecting to a game (client side bug)
- Fixed a bug that crashed the game when a player disconnected (server side bug)
- Fixed 'game doesn't start' bug when using a VPN connection (or other virtual networks)
- Fixed some desert and jungle tilesets (Thanks to city slicker!)
- I rewrote the code when tanks target buildings and also the collision detection/response. It should now be easier to destroy a fort and the number of shots it takes is not random anymore and very close the way it was in Z DOS

Known issues / bugs in version 0.2:
- When a match doesn't end normally (for example by players disconnecting). The replay says it has length "0:00".
- When watching replay. There is an option to create a video (mp4/h264) from that replay. Audio does not work. And there is to file select dialog. The video file appear next to the .exe file
- Start a single player or quickstart match, exit of finish the game, switch to multiplayer or online play, game sometimes crashes when joining or creating a server (bug also exists in version 0.1.6, fixed in 0.2.1)
- IMPORTANT: Backup up your savegame before updating to 0.2 somehow sometimes the savegame gets corrupted after upgrading
Top

Version 0.2.1 has now been send out to the Beta testers. Depending on the feedback the release of v0.2.1 should be either next weekend or the weekend after that.
This version contains mostly bugfixes, but there is also some new stuff:
1) 3 new hotkeys. Select all units (CTRL+A), Focus camera to port (Home key), Surrender (CTRL+R).
2) When in game. When clicking the menu button one can now go to options and change audio settings.
3) Surrendering: Surrendering is basically the same as leaving the game, but one stays connect to the server. Useful for multiplayer when one wants to forfeit a game, but wants to have a rematch.
4) Different game speeds. The in the "create game" menu and ingame in options, but _not_ in singleplayer one can change the game speed. This can also be during the match, but it takes a few seconds until all clients are synced up.
5) When completing a multiplayer game there is now an option "return to game lobby", so that the player can directly start the next match.
6) Bots can now surrender (not in singleplayer!). If a bot doesn't hold a flag anymore and has almost no units it will surrender, so that the match doesn't drag on artificially.

I will have a complete changelog ready soonish.
Top

Finally! The FTP server was down the last few days, hence the delay.
Version 0.2.1 is out. In addition to the post above one can also now reset a map in single player mode from the ingame menu.
You can also thank city slicker for catching quite some bugs during the Beta test